McKennaii Shrooms have darker caps with an oddly shaped and thick stems. We will never know if this strain was a marketing ploy from Dutch dealers or if this in fact is a new strain. Regardless this strain has survived many years and has been passed down to our growers. 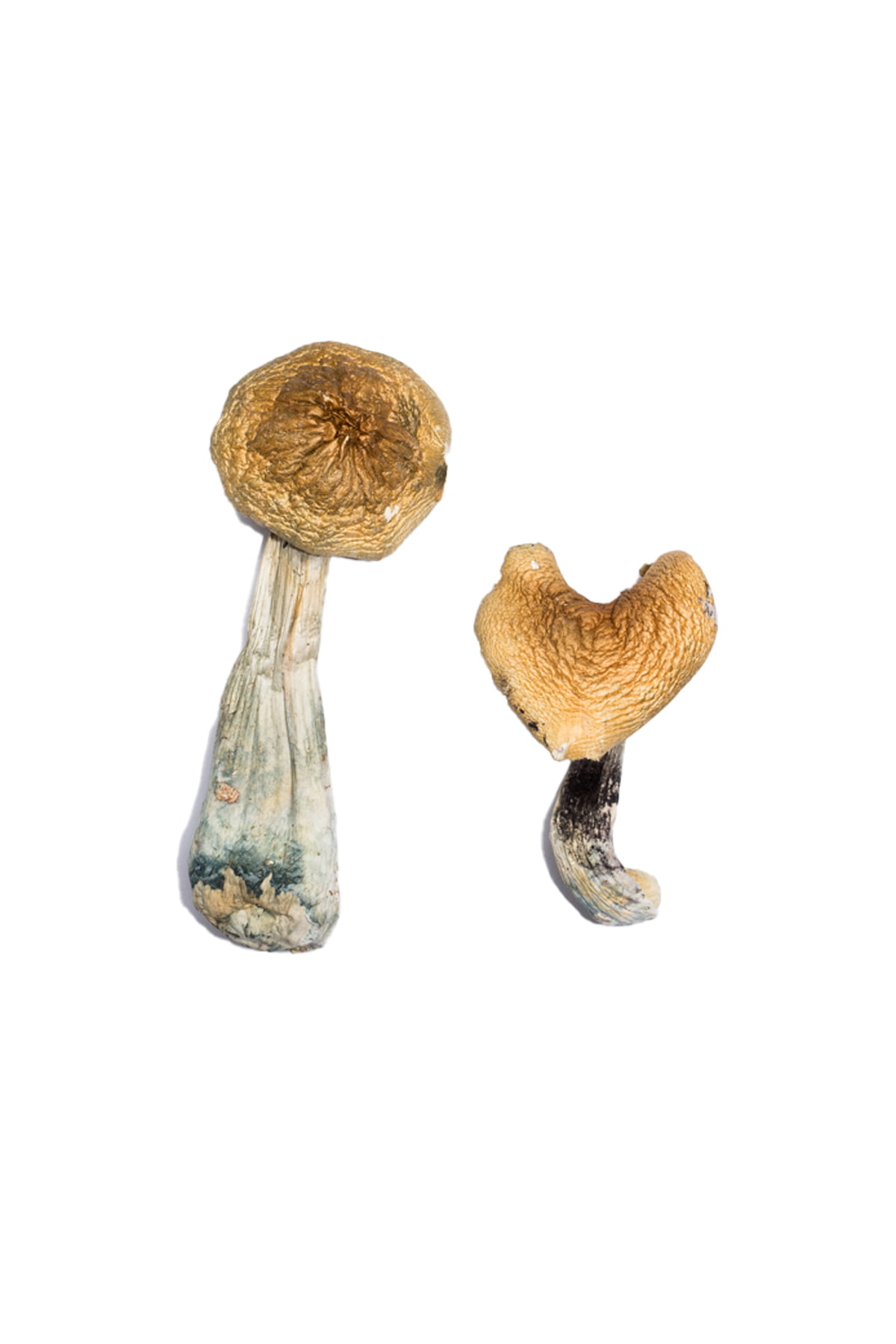 The caps of McKennaii Mushrooms are darker and feature a strangely curved, thick stem. We will never know if this strain was just a marketing gimmick by Dutch merchants or whether it really a novel strain. Nonetheless, this breed has endured for decades and been handed down to our producers.

McKennaii Magic Mushrooms (Psilocybe Cubensis, McKennaii) began appearing in Dutch smartshops soon after the death of the renowned ethnobotanist, mystic, and psychonaut Terrence McKenna. This strain was created to honor the guy who contributed so much to the psychedelics community.

The caps of McKennaii Mushrooms are darker and feature a strangely curved, thick stem. We will never know if this strain was just a marketing gimmick by Dutch merchants or whether it really a novel strain. Nonetheless, this breed has endured for decades and been handed down to our producers.

According to our team, McKennaii Magic Mushrooms deliver a more visual experience than other strains. Expect to have profound sensations of love and connection in your heart.

After 10 to 30 minutes of taking McKennaii mushrooms, pleasure and enthusiasm will increase your mood. Depending on dose, visual improvements might range from minor to strong. Things may seem to be breathing, the surrounding environment will feel more alive, and you may find yourself introspecting.

Music and art will seem and feel differently, and you will have a greater appreciation for them and may connect to them on a more personal level. The usual museum dosage (0.5-1.5g) and moderate dose (2-3.5g) should give 3-6 hours of trip duration.

Mckennai psilocybe cubensis is simple to cultivate, making its cultivation rewarding. With each flush, the form, size, and color of the Mckennaii mushroom might alter.

*some strains produce more flushes than others. The first three flushes are the largest.

The Psilocybe cubensis Mondo® McKennaii Magic Mushroom grow kit differs somewhat from other kits you may have previously used. This is only revealed in the substrate recipe and is a well guarded secret. Even against us!

As with previous and prior simple grow kits, no extra spores are required. During the laboratory procedure, the spores inside the substrate (the cake) in the grow box have transformed into mycelium. The mycelium has completely colonized the substrate and is now capable of producing mushrooms.

How to store the mushroom grow kit correctly

It is recommended to start the cultivation process right away. If you decide to start growing later, you may store the grow kit in the refrigerator (2°C to 8°C) for 2 weeks. First, wrap the grow kit in a plastic shopping bag and close it well.

How to prepare the room and yourself before you begin

The Psilocybe cubensis Mondo® McKennaii Magic Mushroom Grow Kit only needs light for the mycelium to ‘understand’ it has reached the surface. Only then, mushrooms will grow. A few hours of fluorescent/artificial light or indirect sunlight a day is more than enough. Direct sunlight kills the mycelium, so avoid the sun to shine directly on the grow kit.

The day after you start the process you begin with misting. Open the grow bag by removing the paperclip. Do not spray directly on the cake but spray one time against every side of the bag. So you mist once a day, four sprays. Misting also vents fresh oxygen inside the bag. Right after misting, close the bag again with the paperclip.

If the conditions are optimal, you can expect the first small mushrooms (the pins) to appear between 5 and 16 days. This also depends on the strain. Some cubensis strains grow slower than others.

The mushrooms come up in groups. This can be a small or large group. That depends on the strain. A growth like this is called a flush. Mushrooms are almost never ripe at the same time. You can get more than one flush out of a kit. The first two flushes are the largest. When more flushes come, they will be smaller than the previous one.

When the veil between the cap and stem has barely torn, mushrooms are ready and should be harvested. Do not delay any longer. Utilize surgical gloves or thoroughly clean your hands, wrists, and arms. Pick the ripe mushrooms and let the rest to continue growing. Remove the mushrooms from the cake by grasping the mushroom’s base with your thumb and index finger. Slowly rotate your hand counterclockwise until the mushroom releases its grip. Please do not remove the mushrooms. This might potentially harm the mycelium and destroy it. After the majority of the bigger mushrooms have been gathered, also collect the smaller ones and the pins.

Mushrooms that grow from the sides

Mushrooms thrive when there is sufficient light and minimal barrier to penetration. Because the edges of the cake are illuminated, mushrooms may also grow there. This is difficult to refute and may be permitted. Some cultivators cover the sides of the grow box with aluminum foil to keep the sides dark, however this method is not always effective. Buy McKennaii Magic Mushrooms online

When mushrooms grow there, they may be harvested immediately prior to soaking the kit:

Pure hands! Remove the grow box from the bag and set it inverted on your other hand. Shake the plastic container till the cake falls into your fingers. The plastic box may be put on a surface that has been disinfected. This hand is now free to pluck the mushrooms off the cake’s sides. When all mushrooms have been gathered, you may replace the cake in its original plastic container and continue with the soaking procedure.

After all mushrooms have been harvested, you prepare the next flush kit. Using sterilized hands or gloves, remove the grow box from the grow bag. Fill the container with potable, fresh water. Remove the ziploc bag’s lid and use it to seal the grow box. Wrap the closed grow box in a soaking Bag or your own clean plastic shopping bag. This should be stored in the refrigerator (2°C to 8°C) for 12 hours. This is known as the soaking procedure. The cake will now absorb water, preparing it for the next flush.

During the soaking, the grow bag with micronfilter may be hung upside down to dry. Ensure that it is hung inverted so that no bacteria may enter the bag. After each flush, many growers like to use brand-new, unopened grow bags. After 12 hours, remove the bag containing the grow box from the refrigerator and unpack it.

To proceed, repeat steps 3 through 7 from when you started the procedure for the first time. After few days, a fresh flush will emerge. At least two or three flushes may be obtained from a Psilocybe cubensis ‘McKennaii’ grow kit. If you have cultivation expertise, you may get more flushes from a kit.

When it is too late to harvest mushrooms, they will release their spores. Due to the spores, the cake and mushrooms will become black/purple (some other cubensis strains may turn red/brown). This is not really an issue; nonetheless, it is not particularly attractive. When mushrooms release their spores, the spores begin to decay, and so do the active chemicals. Mushrooms lose a portion of their power.

Check out the responsible use page for more information on do’s and don’ts. This kit is meant for small-scale home use only. Buy McKennaii Magic Mushrooms online

Be the first to review “McKennaii Magic Mushrooms” Cancel reply